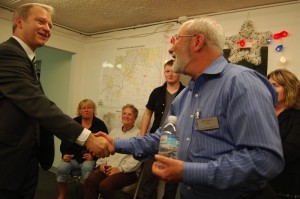 ***Since this article in March of 2013 I am pleased to report that the legal challenges to the Sunrise Project have been solved. In part to the nearly completed Lawnfield re-construction project and by way of securing funds for the Tolbert Overpass.  It was a team effort that included the ODOT, JPACT, Legislators, County Commissioners, county staff, Lawnfield business owners and their attorney.

I am honored to represent Clackamas County as the commissioner liaison for Transportation, though it consumed a lot of my time and effort it paid off on the July 31st when we officially broke ground on the Sunrise project

Here is the link for that too:  http://www.oregonlive.com/happy-valley/index.ssf/2013/07/clackamas_county_and_state_off.html

In the political imbroglios that have characterized Clackamas County lately, Commissioner Paul Savas has found himself in the thick of them — a position in which he likely will remain by formally announcing his campaign for re-election in the coming months.

Savas, 56, an Oak Grove resident and business owner, is the only current commissioner who lives in the populous North Clackamas area. He won a close election in 2010, and then placed third in a bitter four-way primary campaign for the county’s chairperson position last May.

Two camps of solid opposing votes have emerged since the election of three county commissioners in November, and Savas often is the swing vote in 3-2 decisions. He sided with commissioners Jim Bernard and Martha Schader to support exiting Administrator Steve Wheeler and to fund a major repair of crumbling public housing. He has voted with new Chairman John Ludlow and Commissioner Tootie Smith to send questions to voters about Milwaukie light rail and the Columbia River Crossing project. In his first couple of years as a commissioner, Savas emphasized his goals to reduce deficit spending and debt-service costs. He tried to demonstrate the need for balanced funding between rural and urban areas, often on the losing side of 4-to-1 votes.

But Savas would like to focus on the county’s economic prosperity rather than politics.

“I just put that aside — I know it’s relevant, but the partisan bickering is really a distraction,” Savas said. “We need to get to the business of the county, and I think that’s what the citizens want and expect us to do.”

Savas measures the success of his time serving Clackamas County using his experience as an elected member of governing boards in Oak Lodge service districts. He’s not satisfied with the progress the county has made over the past few years, nor with its image.

“I want to leave organizations in a better place than when I found them,” he said. “I did that with the water and sewer districts, and that’s what compels me to move forward with my 2014 re-election campaign.”

To delve deeper into Savas’ priorities and the reasons behind his support for various initiatives, this newspaper sat down with him for an extended interview.

Question: What would it take for you to feel comfortable taking a strong stance on the CRC project as proposed?

Answer: The CRC is not our project; we have no intimate knowledge of it. Simply put, I believe in making informed decisions on projects of this magnitude. ODOT should pitch this project to us and answer our questions; they have over 10 years of history with it.

When any project is proposed, I expect an in-depth work session with the project team. After reviewing the material, the work session would include a question-and-answer period. It is customary to receive material on a Thursday and have a work session on the following Tuesday. On complex issues it is quite common to have several work sessions over a period of months. Code enforcement is just one example of that.

I typically rationalize my position whether I am in support or opposing. Should I oppose something, I often include solutions that could garner my conditional support. I realize it is easy to just say no, but that is not a responsible approach for an elected decision-maker. Too often, political motivations lead to exaggerations and disinformation. I believe government has an obligation to be informative and factual. After all, our citizens expect the truth.

Q: What’s left to do with Easton Ridge, and why do you think it is important for the county to provide quality public housing?

A: The Easton Ridge structures have some water damage and mold issues. Unfortunately, circumstances such as the recession prolonged adequate financing opportunities to repair the lemon we inherited. The good news is rent monies are expected to fully fund the repairs, and those repairs will be under way soon. I was successful in getting full board support for a performance audit of the Housing Authority of Clackamas County, forming a new advisory committee, and bringing in experts in building maintenance and repair to look over the housing inventory of the HACC.

The county does not provide public housing nor do we fund public housing, the county commissioners essentially sit on the HACC board, which owns the housing and implements the federally authorized program. If the county chose not to be in that role, another group would be.

Q: How have your views on Portland-Milwaukie light rail changed since you first ran for commissioner in 2010?

A: My position on PMLR has not changed. My financial concerns have not only been reinforced, but are more serious than I was led to believe. TriMet’s financial outlook is grave.

Q: Why do you think it’s important for voters to weigh in on the Trolley Trail with regard to light rail?

A: The language and spirit of Measure 3-401 (which passed overwhelmingly in September) requires a vote on resources used for light rail, and it just so happens that the park district is obliged to transfer resources to TriMet. The Trolley Trail property is a large part of that.

What I am concerned about now is that many citizens have high expectations that 3-401 would stop PMLR. However, if the prevailing legal opinions stand, there will be some disappointment. It is very clear now that the legal challenge initiated by TriMet will put this matter in a court where a judge will ultimately decide.

Q: What other challenges and opportunities do you see for the North Clackamas Parks & Recreation District in the future?

A: The NCPRD is facing similar financial pressures that numerous government entities face — basically expenses are outpacing revenue. The district advisory board will be exploring options that could improve their financial status, efficiencies and park facilities. We have many citizens that care deeply about our parks.

Q: What can Clackamas County focus on in the next few years to maximize local commercial and industrial potential?

A: The county must first prioritize economic development in its top tier of goals. Then we should align our land-use and transportation plans to position our employment lands to a status that will attract new business. Infrastructure is a vital component of that, and it is one of our key responsibilities. Clackamas County has a major shortage of employment land inside the urban growth boundary. Traded-sector businesses often pay above-average wages and stimulate other industries. We are now inventorying all of our employment land and seeking ways to maximize underutilized properties. We are also looking outside the urban growth boundary for typical rural industries such as our lumber mills, farming, food processing, nurseries and other suitable employment opportunities.

Q: Why do you characterize the county’s road system as failing, and how would the county readjust its priorities to address the problems?

A: Our road condition-testing program has identified the roads in jeopardy. The county must maximize every dollar we currently receive for roads.

The remaining shortfall is significant, and the commission must wrestle with ways to address it. The cost to maintain roads is far less than rebuilding a road once the roadbed deteriorates. Our last survey indicated this is a high priority with our citizens. I take that very seriously, and I believe my fellow commissioners will, too.

As the county’s representative on JPACT, transportation is a key responsibility. The Phase 1 Sunrise project is facing a legal challenge partly due to the unfunded Tolbert overpass.

We are hopeful the state can find an additional $25 million. Myself and Commissioner Schrader have been engaged in lobbying efforts for those extra dollars both in Washington D.C., and Salem. Meanwhile, ODOT has indicated the project is going forward. The Highway 212/Sunrise Corridor is home to the largest economic engine in Clackamas County.

The other major transportation issue is Interstate 205 where it bottlenecks from six lanes to four lanes. The Abernethy Bridge over the Willamette River is part of that, and we currently have rush-hour traffic congestion and frequent accidents. It is important to get this identified as a needed project and a priority. Commerce is dependent upon a functioning transportation system where freight can move efficiently.