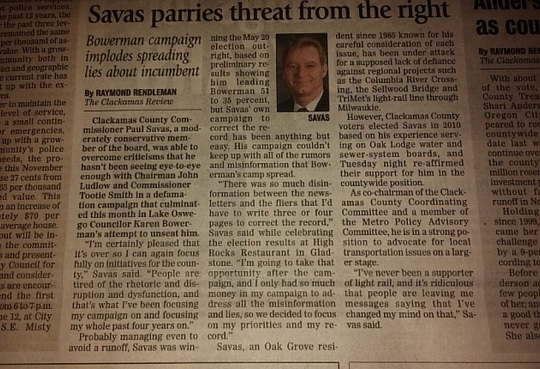 Clackamas County Commissioner Paul Savas, a moderately conservative member of the board, was able to overcome criticisms that he hasn’t been seeing eye-to-eye enough with Chairman John Ludlow and Commissioner Tootie Smith in a defamation campaign that culminated this month in Lake Oswego Councilor Karen Bowerman’s attempt to unseat him.

“I’m certainly pleased that it’s over so I can again focus fully on initiatives for the county,” Savas said while celebrating the election results at High Rocks Restaurant in Gladstone. “People are tired of the rhetoric and disruption and dysfunction, and that’s what I’ve been focusing my campaign on and focusing my whole past four years on.”

Probably managing even to avoid a runoff, Savas was winning the May 20 election outright, based on preliminary results showing him leading Bowerman 51 to 35 percent, but Savas’ own campaign to correct the record has been anything but easy. His campaign couldn’t keep up with all of the rumors and misinformation that Bowerman’s camp spread. After 23 years of an active military career, Rick Best decided to challenge Savas rather than newly re-elected Commissioner Jim Bernard based on flipping a coin, avoided campaign donations and only received about 13 percent of the vote.

“There was so much disinformation between the newsletters and the flyers that I’d have to write three or four pages to correct the record,” Savas said. “I’m going to take that opportunity after the campaign, and I only had so much money in my campaign to address all the misinformation and lies, so we decided to focus on my priorities and my record.”

Savas, an Oak Grove resident since 1985 known for his careful consideration of each issue, has been under attack for a supposed lack of defiance against regional projects such as the Columbia River Crossing, the Sellwood Bridge and TriMet’s light-rail line through Milwaukie. However, Clackamas County voters elected Savas in 2010 based on his experience serving on Oak Lodge water and sewer-system boards, and Tuesday night re-affirmed their support for him in the countywide position. As co-chairman of the Clackamas County Coordinating Committee and a member of the Metro Policy Advisory Committee, he is in a strong position to advocate for local transportation issues on a larger stage.

“I’ve never been a supporter of light rail, and it’s ridiculous that people are leaving me messages saying that I’ve changed my mind on that,” Savas said

Letter to the Editor: Commissioner Savas deserves our vote